As I write this post, we have been in the US for almost 4 months. We have never stopped being in the ministry, but North America is not our place of ministry. We are missionaries in Portugal. Why, then, are we here? I believe that not everyone understands how missions are funded. There are several models for funding missionaries. I would like, through our testimony, to give you an idea of how our ministry in Portugal receives the funds for its existence.

In June of 2004 I became the pastor of Living Hope Baptist Church, in Albufeira, a city in the Southern coast of Portugal. In 2013 the Lord began to convince us of a change of direction for our ministry. Soon after that, we turned over the church that I pastored for about 10 years to a man that I trained, and we  launched out as church-planting missionaries to the country of Portugal. Our heart is to start as many churches as we can, to train people and help them start churches, and to assist in the reproduction of the already established churches.

When we transitioned to this new ministry we also let go of the salary that our church used to pay us. That church in southern Portugal is self-sufficient (in the Lord) and the salary they used to give me went to their new pastor. At that point in time, we decided to present our vision for church planting in Portugal to the churches of the US. For accountability purposes, we joined Narragansett Bay Baptist Church, of Warwick, Rhode Island. They are our sending church and we are under their authority and supervision. When churches or individuals send us funds, those funds are sent to NBBC, who gives receipts of them and oversees how the money is spent. We also file taxes both in the US and Portugal, where our ministry is registered before the government. There is a proper paper trail for every mission’s dollar we receive.

In 2013 we came to the US for about 10 months (all the time I was allowed on my Canadian passport, because it encompassed two calendar years) to present our ministry in churches. Right now it is taking missionaries about 2 years to raise support (and some even more). That period of time, when missionaries are raising funds to go to the mission field for the first time, is called deputation. The Lord blessed and we were able to raise enough funds to sustain ourselves in order to work full-time in the new church planting effort in Portugal.

Traditionally, missionaries would stay 4 years in the field and then return for about a year. That period of time that missionaries would be off the field is called furlough. It is a time to reconnect with their home church, extended family and with the culture of their nation. It is also a time to take care of paper work and visit some of their supporting churches to give a report of their mission work. Nowadays, with the easiness of travel, things have changed considerably. Missionaries are able to go back more often, for smaller periods of time, which is less disruptive to the flow of their work in the mission field. Also, the new forms of communication have eased the separation between the missionaries and their churches and families.

Last November, my wife and I came to the States on a trip that we are calling furlough, because it has had some aspects of that. Despite that, this trip has had very much the burden of deputation. If it was a movie, it would be a sequel and it would be called “Deputation, Part 2”. The truth is, we were in need of ministry funds. The needs involve having money for renting facilities for our next church plant, for traveling costs within the country (as I write, the price of gasoline in Portugal is over 6$ per gallon), and for the printing and publication of materials. That is why, even as we have traveled to some of our supporting churches to give a report of our ministry (furlough), we have dedicated most of our time visiting new churches (deputation).

Before we left Portugal we set a very specific goal for this trip. We wanted to add a certain amount to the monthly funds that we receive. This is more than just one time offerings. The goal is to establish partnerships, with churches and individuals, that will send support on a monthly basis. After we established our goal for this trip, we realized that there were four possible ways this would happen and most likely the goal would be completed through a combination of all of them.

Being that the focus of the trip was to visit new churches, we knew that more than likely, the goal for this trip would come from a combination of any or all of the following: 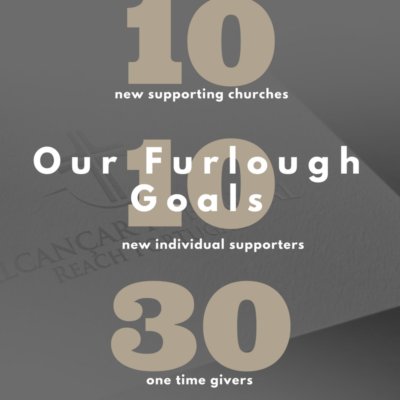 It is one thing to put a goal and the plan to reach it on paper, quite a different thing is the actual working out of said plan. This is even more true of something that we deeply believe to be spiritual in nature. We want to be God led in everything that we do and not be guilty of letting our man-made plans limit our expectation of what He is definitely able to do.

Considering the world of missions and the concrete work of raising funds for missionary work in our corner of Christianity, I have to admit that, even after laying down a goal and the plan to achieve it, I was doubting.

We arrived in the US on November 17th, 2016 and the initial plan was to stay until January 31st. After we arrived, through events that involved a serious health concern over a close family member, and receiving several invitations to visit churches and missions’ conferences (check our latest Prayer Letters for news regarding Aura’s mom’s health), we decided that it was God’s will for us to stay longer. We will be returning to Portugal on April 2nd.

As I write these words, we are at almost 88% of the goal that was set. The Lord accomplished this through 9 new supporting churches, 1 individual supporter (only our second), and 1 church that decided to increase their support of our ministry.

I want to end this already too long post by reminding you all that the focus of missions is not the raising of funds. The focus of missions needs to be Christ and the privilege of being involved in what He is doing, through the Gospel, all over the world. We believe the cities, towns and villages of Portugal are in great need of the light of the Gospel. It is because we believe in the worthiness of the Saviour and in the worthiness of His work, that we are not ashamed of involving others in it. There are two main ways regular church members can be continually involved in world missions: they can pray, and they can give. If you are willing to partner with us in either or both of these, we would like to hear from you. We are thankful and honored for the ones of you that already do.