Below is the text of our latest Prayer Letter. The PDF version of the letter is available if you click here. We send every Prayer Letter by email to a group of dedicated prayer supporters. If you would like to be included in our mailing list, please let us know. Our email address is mark@reachportugal.com. 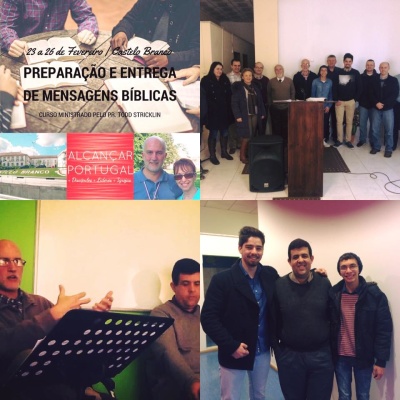 “We are salt and light!” was the theme that developed during Winter Camp. Two young people from the Castelo Branco church were there as campers and some of our church people served in different capacities. Aura and I helped as we could but what happened during those three days went beyond what any of us could have anticipated or planned for. I had asked one of the older boys, who has been coming to these camps since the beginning, to prepare a 20 minute chapel devotion. He accepted with obvious anticipation and did a great job. One of the pastors that was going to come and help with the teaching, was not able to come. Last minute, we decided to challenge three other young men to come up with 10-minute devotional challenges. I didn’t know how they would react, since they would only have one day to prepare. They were thrilled for the opportunity to serve the Lord in that capacity. Again, the Lord moved through them and the messages were personal, Biblically sound, and around the same theme that had been presented by the missionary that was the main speaker for the camp. Two of the boys that preached during camp were part of the Homiletics and Hermeneutics seminar that we just had. Our pastor from the States, Pr. Todd Stricklin, came to teach that week long seminar and those young men were thrilled that they could be a part of that class. About 13 other people attended, from all over Portugal.

Other young people, boys and girls, indicated that they would like to be used during the Summer Camp to help with the younger campers, in any way that is needed. After camp, I approached the 14-year-old boy with whom I meet weekly for Bible Study about the possibility of him preaching a short message some time in the future. His response? He wanted to bring it up and didn’t know how! We will start more directed training on this subject soon. Would you pray for this young man?

In the middle of the Atlantic Ocean there is an island of about 10 thousand people called São Jorge. It is where I am from. All of my direct ancestors have lived on that island all the way back to the 15th century. There is not a single Gospel witness on the island. During camp, I shared my burden for São Jorge and the fact that in the last few months there has been a 10-fold drop on the cost of travel there (it’s a 2 hour flight from mainland Portugal). The door for us to share the Gospel to those people seems to be opening. We are attempting to put together a Missions Trip to São Jorge for the summer. Our young people are excited about this project. Will you pray that we can take a group of them there and share the good news to those people?

Thank you for your love and support for the ministry in Portugal.

In His Service, Mark and Aura Pereira

Questions About Portugal: “What do people eat?”