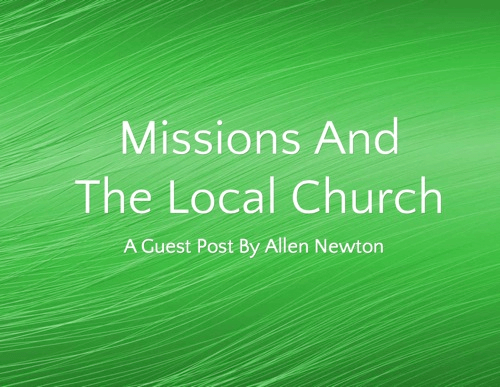 Allen Newton is a veteran missionary in Portugal. He arrived in Portugal as a missionary in 1989, with his wife Barbara and three children (now grown and out of the house). They are serving the Lord in the city of Castelo Branco, close to the border with Spain, after planting a church in Southern Portugal. They are starting a new church and leading a Christian camp called “The Mount of Olives”. Recently, the world found he has writing as a hobby. His first Biblical Fiction novel is available as an ebook or paperback here. They are going back to the States on furlough this September for 8 months and they are still booking meetings. Send them an email if you would like more info portfigs@yahoo.com.

Just one more note on the mission board concept: Even the mission boards that are the most careful to not usurp the authority of the local church run the risk of doing so in ways that sometimes seem unimportant until we analyze them closely. It seems completely reasonable for a mission board to hold ‘their’ missionaries to certain standards and practices (accountability). Typically a church and the missionary they are sending are asked to agree to a set of conditions so that everyone can walk together in harmony. This principle in and of itself is absolutely correct – but do we not have the direction wrong? Shouldn’t it be the sending church that sets the standards and practices for their missionaries? How about we let the mission board decide if they are willing to go along with the local church’s position instead of the other way around? Wouldn’t that solve a lot of questions as to who is actually in authority?

And so, now we are on the mission field! What now?

What exactly is it that we are to be producing there?

New believers! Well, that’s kind of God’s thing, isn’t it? But we are called to take them the Gospel. All of us. The missionary must evangelize, of course, just like his home church must. But the specific task of the missionary is to start new churches.

Now I ask you, what is the relationship between the missionary’s sending church and the new works being planted on the field. Once again there seems to be, in many cases, a disconnect.

I can’t imagine the most laissez faire pastor remaining very long in ignorance about the Sunday School ministry of the church he pastors. Or the teen ministry, or the music ministry… need I continue? The missionary sends reports to everyone, including his sending church. That is correct and proper. Should there not be a deeper level of communication and connection between the sending church and the new missions?

And what model are we, as missionaries, following as we plant new churches?

Two years ago I had a contention with another missionary over our camp ministry. He asked me to accommodate some Muslim young people at the camp. I would have, of course, welcomed the chance to help evangelize these young people, but the missionary said they had dietary restrictions because of their religion, and could we help with that. I explained we would not change our menu to accommodate that, but that we certainly would not force them to eat anything they didn’t want to. His other request was that they be allowed to say their evening prayers to Allah while at the camp.

I never thought I would hear such a request, and I let him know in clear terms that that would not be acceptable. We discussed the issue for a while, and I asked him if he would allow that at his church.

“Of course not,” was his answer, “but camp isn’t church.”

I was subsequently surprised that other men of God actually seemed to agree with that assessment; at least at first.

Have we gotten so far away in our understanding of ‘church’ that we start creating separate principles for some facets of our ministry?

I tried, to no avail, to explain to him that our camp ministry, like our Bible institute ministry, kid’s club and any other ministry that we enter into are, of Biblical necessity, under the authority of a local church. While it is a mission, the local church authority comes from the missionary’s sending church. Once the work becomes established as a church… well, it is a church!

Isn’t that what we go out to plant? Shouldn’t it be the same type of entity as the one who sent us? Isn’t that what it really means to be “local church missions”?

A Camp Where God Moved

[Video] The Secret is Out! Portuguese Custard Pies

What I Learned From This Year’s Youth Camp

How to Email a Missionary