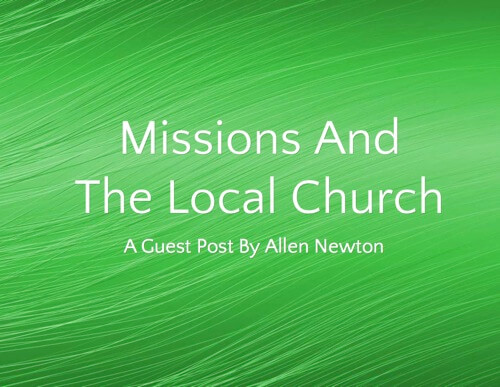 Allen Newton is a veteran missionary in Portugal. He arrived in Portugal as a missionary in 1989, with his wife Barbara and three children (now grown and out of the house). They are serving the Lord in the city of Castelo Branco, close to the border with Spain, after planting a church in Southern Portugal. They are starting a new church and leading a Christian camp called “The Mount of Olives”. Recently, the world found he has writing as a hobby. His first Biblical Fiction novel is available as an ebook or paperback here. They are going back to the States on furlough this September for 8 months and they are still booking meetings. Send them an email if you would like more info to portfigs@yahoo.com. Oh, that’s right, he is also my father-in-law.

So much could, and should be said on this subject, and I do not believe I am hearing a lot that needs to be said.

First let me say that though I don’t personally hold to a “local church only” position to the exclusion to the existence of anything bigger, I firmly believe that God has ordained that His work be done through and with the authority of the local church during the period of time in which we live.

I can easily fellowship and cooperate with people who do not hold my exact position on this matter, as long as they do not show me disdain for our disagreements. And as long as they accept that ministering for the Lord is to be done through and with the authority of the local church.

What, exactly would a mission work look like if done through and with the authority of the local church?

Let’s start with the sending church.

Let me say that I have seen some examples that I found extreme – on both sides of the question.

I have seen churches that seem to consider their missionary as nothing more than someone they support. In most cases this is probably fruit of what seems to be a common philosophy in independent Baptist missions. In practice (whatever the mindset behind it actually is), missionaries are not really a part of ‘us’. They do their thing and we do ours.

On the other side, I have seen missionaries who were required to contact their pastor before making any type of decision.

Neither of these positions seem to me to be what we see in the Scriptures. The missionary should be sent by a local church as were Philip, Paul, Barnabas, Silas et al. We see these men fulfilling a function that belongs, not to them, but to their local church. To their supporting churches, they are representatives (deputies). To their home church, they are the person in charge of the ministry in that location. They should be subject to the same scrutiny, guidance and consideration as the other staff members in their respective ministries. This viewpoint is not only Biblical, it is balanced and reasonable. We say that missionaries must have the authority of the local church behind them in order to be Biblical, but sometimes we don’t really put that principle in practice; often with unwanted results.

And now, the mission board/agency.

In my 25 or so years as a missionary I have seen quite a few models of this entity. There is, I believe, room for some disagreement in some questions regarding the mission board/agency, but it behooves us to keep the local church principle clearly in focus in this area, no matter what actual model we end up using.

Why do they exist? Most independent Baptists would reject totally the notion that they exist to send out missionaries. We know our Bibles too well to say that. So why do we need them; if indeed we do?

Some want a missions agency to simply provide a way for their missionary to receive their support every month. Some would like more, ranging from help in lining up meetings to foreign visa and travel information etc. Some go so far as to want a mission board to ‘make the missionary accountable’.

I find the ‘accountability’ option troubling. Local church, right? Is it too much to ask that a supporting church contact the sending church for information about their missionary? To they really need someone else for that?

If the question is about processing money, it seems to me that most local churches could handle that in house. I have talked to some pastors who have a lot of missionaries out of their church who tell me it would be difficult for them. So, one answer is to have someone else do that for the local church. Whatever the reasons that a church has for going that route, that is their business. I do not see anything in Scripture that forbids it.

But if, as I have stated, this is a service to the local church, who should be responsible for paying for this service? And just like that, a whole new can of worms is opened. Some say that burden should be borne by the supporting churches in one form or another. Some agencies take a flat fee for their processing; others a percentage. Some make no charge to the missionary. The fact remains that someone will finance this operation whether done by the sending church or by a mission board.

I personally have a preference in this area, but I won’t go so far to say that there can be only one way to meet this need. I will say, categorically, that the responsibility for it lies with the one served – and that is not, specifically, the missionary; or even, directly, the supporting churches. It is, indeed, the sending church.

I will confess that I am bothered by the fact that mission boards use money designated for supporting missionaries to fund their operations. And even if a mission board does not take a set fee or percentage from the support sent in through them, many times their staff have missions support and/or their home office operations are funded by direct missions support. I cannot say that churches do not have the right to spend their missions money that way, but it seems to me there is a better way; one that more carefully adheres to the local church principle.

Summing up, if a church desires to expand their outreach, they should be willing to assume that responsibility. Cooperation with other churches for missions is great, and even Biblically demonstrated, but the sending church is not just another supporting church.

Sunday Missions Devotional: Who is listening?

What should be a ministry’s 10 most important values? Part 1 – Semi exhaustive list of values

Wow! This Coca-Cola comercial shot on a Portuguese island is a must-see