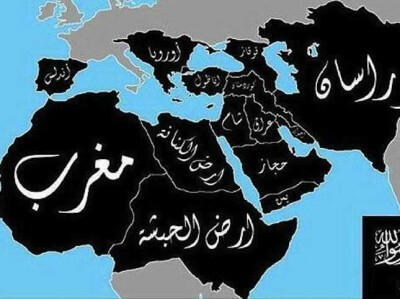 The terror islamic group ISIS has been the center of attention, as they now control, in Syria and Iraq, a territory larger than England. This group and their black flags is known for spreading terror in any place they conquer. Their goal? To establish a Suni run islamic state, or caliphate. ISIS has been brutally killing Christians, Curds, and even other Muslims that refuse to convert to their version of Islam. In the news lately has been the fact that these jihadists have been beheading Christian children to further spread the terror associated with their “brand”. ISIS is so bad that even Al Qaeda has decided not to associate with them, because it could damage Al Qaeda’s “reputation” (read the Daily Mail report here). If you have a few extra minutes, please read an account of what is going on by an independent Baptist missionary that is involved in missions in the affected area. Our prayers should be with our brethren under this kind of fierce persecution. ISIS is expanding, they are about 130 miles from Bagdad and they don’t want to stop there.

The map in this post is a map that some ISIS supporters circulated recently on social media (see an ABC report about this). It apparently is a five year plan of the territory that ISIS expects to control under their caliphate. Some people are calling this map a hoax because it is not from an official ISIS source (given the nature of the group, I assume that is hard to determine). Regardless of its origin, what the map makes clear is that there are people in that side of history that would like to see an islamic state with those dimensions.

As you can imagine, the first thing I see when I look at this map, is that it includes all of Portugal. We are now serving in the city of Castelo Branco, 2:30 hours from Lisbon, close to the border with Spain. Yesterday, as I was taking a walk around town, I started observing people just going about their normal life. I felt thankful that I lived in such a peaceful part of the world. Nothing that resembles war has affected these people in almost 200 years. I started imagining how different everything would be if ISIS would ever get here. I am not an alarmist or a “conspiracy theorist”. I am a bit weird, but that is besides the point. Call this a compassion exercise. As I prayed for our brethren in Iraq, I was trying to imagine what it would be like to be living your normal life and, all of a sudden, have to deal with such an invasion. Having lived in peace all of my life, I find this very hard to do. I need to be thankful for all of God’s blessings.

Immediately, my mind went elsewhere. If people in ISIS can have a five year dream for Portugal, so can I. If they live and breathe their religion of terror, I can live and breathe Christ and His grace. The number of people in Portugal that know Jesus as their personal Savior is probably less than 1%. Nothing short of an invasion is needed. Here is what we are going to do:

I know I have not stated anything new. I know that this is what we have been doing over the years in Portugal. I know we are not the only ones doing it. I just think we need to remind ourselves, from time to time, of what we are trying to accomplish. As missionaries our goal is not to become pastors of churches on the mission field. As missionaries we should always keep the bigger picture in front of us. We are not here to do the work of the ministry. We are here to train others to do the work of the ministry. Others can do what we can do, and they can do it better. As soon and somebody has been trained, we can move on.

It is known that ISIS is recruiting. Many of the jihadists fighting in Iraq are Americans and Europeans that have been recruited over the internet for that unholy war. There was a report a couple of weeks ago in the Portuguese media about Portuguese young men, fighting for Islam in Iraq and Syria. Well, I believe God is recruiting for Portugal as well. Would you like to join us in the fight for the souls in Portugal?

3 Reasons Why I Am Excited About Scheduling Meetings In Churches