This is a guest post written by my friend Torrey Stricklin. Torrey is 20 years old and a College student. His passion for soccer (he is a superb midfielder and I have had the privilege of watching him play several times) is only surpassed by his passion for Christ. Torrey has a consistent Christian testimony. You can find out more about him on his Facebook page.

Portugal is one of three countries closely knitted to my heart. The other two are the United States and Nicaragua. I live in America and was a missionary kid to Nicaragua. Portugal is a country that I have come to love as my own over time.

The country is knitted to my heart for a variety of reasons. I love Portugal and it is a great country that in many ways is my second home. This love comes from me being part Portuguese, playing and loving soccer, visiting the country twice and connecting well with the Portuguese people during my visits.

Also pastor Mark has had a huge impact on my life and has become a very good friend of mine over the past few years. His life story is a remarkable one and has impacted my life greatly. Also his vision for his country is truly amazing and one that I believe the Lord will accomplish through pastor Mark and the help of others.

I have been deeply touched and moved to see his love for his country and countrymen. He has a big dream of seeing many churches planted throughout the entire country of Portugal and seeing a country changed by the Lord for the Lord. I believe the Lord can do anything and so does pastor Mark.

Portugal is a lost country drowning in Catholicism. Roman Catholicism is the dominant religion in Portugal and the majority of people claim to be Catholic. They put their trust and hope in a religion that unfortunately will ultimately fail them. This is why pastor Mark’s vision is so crucial and needed.

The people of Portugal need to hear about Jesus.

During my time there we traveled a lot to see as much as possible and to try and experience as much of the Portuguese culture as we could. I quickly realized how beautiful a country it is. Whether it was the beautiful land filled with olive trees and sheep, the great city of Lisbon, the beautiful beaches of Albufeira, the old Roman ruins or the many castles; Portugal is a beautiful country and one that everyone should visit. 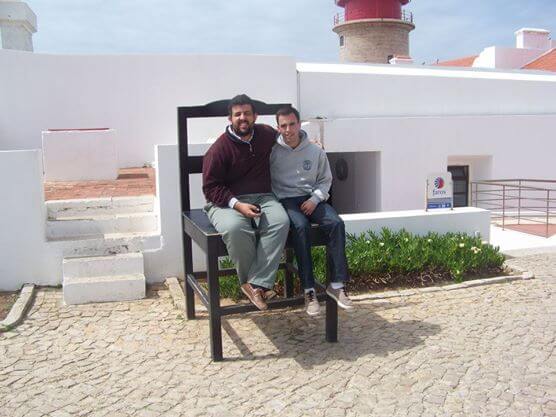 (Image: Pr. Mark and I during one of my Portugal visits)

However, what really impacted me was not all of the great scenery or the fact that they love soccer so much, but what really changed me was the people of Portugal. I met so many people during both of my visits and my heart was connected immediately to anyone I met. They all were very friendly to me and treated me so well. They are beautiful people.

Throughout my time in Portugal I became proud to have a heritage in Portugal. Anyone that knows me will tell you that I constantly brag about my family’s past there. I like to say that is where all my soccer ability comes from.

However, the more I became attached to this country and the people the more I realized how lost they were. This country needs to have a revival. They are lost in a failing religion. They are worshipping idols and performing rituals hoping that it will pay off. They worship a sport and those that play it like gods. They just don’t worship the one God that can actually save them.

The Portuguese people are looking for something to save them; they just do not know where to find it.

What really challenged me were the young people. I have a heart for the youth of the world and it was no different in Portugal. My heart went out to the youth for so many different reasons. At times during my visit I was jealous of the Portuguese youth. They had a beautiful country with a very unique culture that I loved and of course their favorite sport was soccer. I fit in so well because of it. I wanted to move there and live in a country with a cool culture, nice people and where soccer was the big sport.

However, what I realized was that even though they had so much they were missing something very important in their lives. They were missing the only thing that really mattered. They did not know Jesus. However, we have already seen the Lord work in great ways in Portugal with churches being planted and people being saved and baptized.

Have you ever been in a missions trip? What impressed you the most? Join the conversation, leave a comment below.