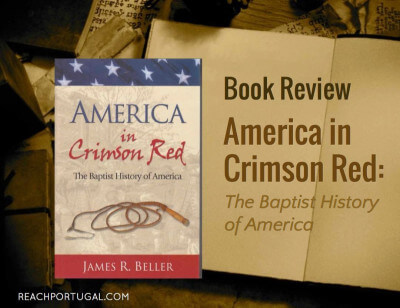 In 2012 I had the chance to watch online, from my study in Portugal to the sessions of a conference that was going on near Atlanta, GA. The conference was on church planting and the keynote speaker recommended one book in particular. The book was “America in Crimson Red: The Baptist history of America”. I just had the chance to finish reading this book and there are several reasons why I recommend it.

The religious situation that the first baptists or, as the author refers to them, baptized believers encountered when they first arrived in the new colonies was not much different than what we experience in 21st century Portugal. There was an established religion that all were expected to be part of. The way to enter the religious establishment was via infant baptism. Biblical baptism, id est the immersion of converts upon testimony of faith in Christ alone, was frowned upon specially if it was the baptism of someone that had been “baptized” as an infant.

This book takes us back to a time in US history where there was a religious persecution from which, by God’s grace, we have been spared in Portugal. Baptists all the way back to the 1630’s were being forced to pay taxes to support churches and clergy that was not their own. Many, rejecting to disobey God and Scripture, were put to prison and shed their blood for refusing to sprinkle their children.

There are many great reasons for anyone to read this book, but I would just like to mention one name – Shubal Stearns. Born in Boston, MA in 1706, Shubal Stearns was saved through George Whitefield’s ministry. He was immersed in 1751 and ordained in 1755. Mr. Stearns started a church in Sandy Creek, North Carolina that had church planting at its core. In 1758 there were already three fully constituted churches, all with church plants of their own. In 17 years, the church at Sandy Creek had 42 churches as its direct descendants and 125 ordained preachers!

The church members were very involved in the church planting efforts. They had a practice where, after an area was identified as needing a church, the members of the reproducing church would go and “sit” for services at the new church plant. These believers would rotate in these duties, so it wasn’t the same people doing all the work.

As I look at the historical background of what today is called “the American Bible belt”, I can’t keep from believing that God could do the same thing in Portugal through organized church planting and leadership training. May we continue to walk in His grace and trust in His power.

James Beller, the author, is from St. Louis, MO and has been the pastor of Arnold Baptist Tabernacle in Jefferson County, MO, since 1987.

The History of Portugal (in less than 1000 words)

An Island I love

A Change in Plans